Ventricular myocardium serves as the functional tissue of the heart wall. Driven by intracellular calcium waves, the tissue rhythmically contracts to finite strains. Modelling this behaviour is a key step toward modelling the complex, coupled electro-chemo-mechanical behaviour of the heart.

Our chemo-mechanical formulation for describing and studying the active response of the myocardium is posed within the general framework of continuum thermodynamics. Following the recent work of Holzapfel and Ogden (2009), we treat the passive mechanical response of the tissue as non-homogeneous, orthotropic, nonlinear elastic and nearly-incompressible. Our automated computational framework for nonlinear elasticity, CBC.Twist, allows us to easily implement and test this physiologically-relevant constitutive model. 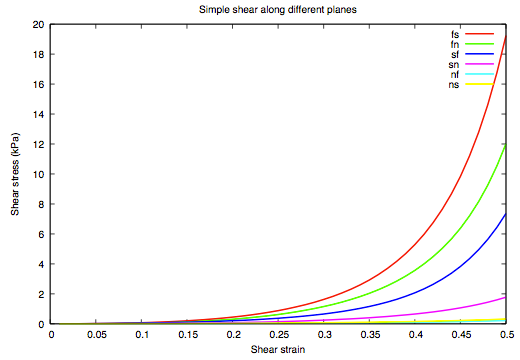 We then introduce, via a multiplicative decomposition of the deformation gradient (Ambrosi and Pezzuto, 2011), an “active strain” to model the active response of the myocardium. We carefully consider physiological facts to arrive at a suitable functional form for this active strain in terms of active contraction of cardiac muscle fibres. The active fibre contraction is related to the chemical kinetics of crossbridge cycling in cardiac muscles, which we model by a set of ordinary differential equations (Rice et al., 2008). Our active model satisfies key physical properties, including obeying the second law of thermodynamics and ellipticity of the total stress.

We are currently designing and implementing an interface to allow us to couple the mechanics capabilities of CBC.Twist with the chemical kinetics of cross-bridge cycling. This should soon allow us to solve numerical problems on realistic geometries to demonstrate key aspects of the coupled active response of the myocardium. 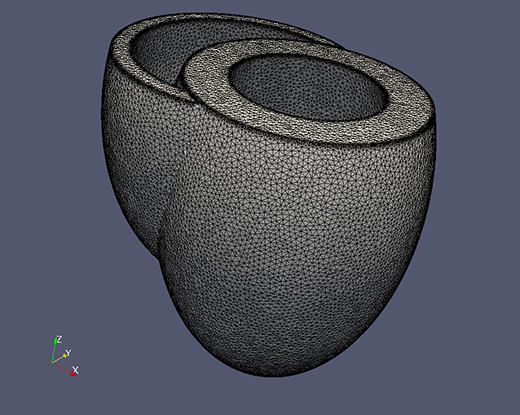 A finite element mesh of a generic biventricle generated with CGAL.

The code for this effort (Python sitting atop the FEniCS Project) will be released under the GPL once we iron out the kinks.