Nonlinear elasticity theory plays a fundamental role in modelling the mechanical response of many polymeric and biological materials. Such materials are capable of undergoing finite deformation, and their material response is often characterised by complex, nonlinear constitutive relationships. Because of these difficulties, predicting the response of such materials to arbitrary loads requires numerical computation (usually based on the finite element method).

The steps involved in the construction of the required finite element algorithms are classical and straightforward in principle, but their application to non-trivial material models are typically tedious and error-prone. We believe our automated computational framework for nonlinear elasticity, CBC.Twist, is an elegant solution to this problem.

Hyperelastic dolphin in a flow!

CBC.Twist aims to allow researchers to easily pose their problems in a straightforward manner, so that they may focus on higher-level modelling questions, without being hindered by specific implementation issues. It is built atop the FEniCS project, and is collaboratively developed free software. We’d love for you to try it and tell us what you think!

The capabilities (and elegance!) of CBC.Twist is best captured in the following example, a hyperelastic block being twisted by 60 degrees.

Notice that the code above only contains information directly pertinent to specification of the mechanics problem. This includes the definition of the computational domain, material model, boundary conditions and body forces. The underlying framework parses this human-readable Python code, automatically performs several steps (including the most tedious one of them all: linearisation of the nonlinear problem) and generates efficient C++ code for finite element computation.

When run, we see quadratic convergence of the Newton-Raphson scheme used to solve the nonlinear problem and a pretty solution! 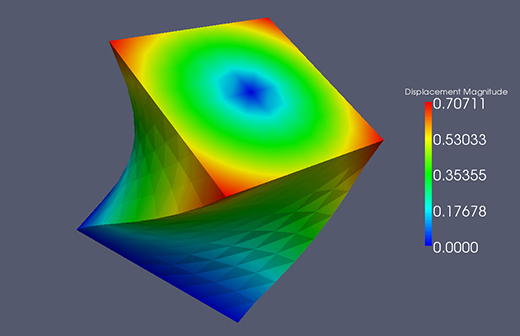 But the fun does not stop there. CBC.Twist includes a lot of other nifty features, including:

Additionally, the following extensions are being worked on:

This software is part of research carried out in collaboration with Anders Logg and Kristoffer Selim at Simula Research Laboratory in 2009 and 2010. It is part of a larger project which aims to offer the same level of functionality (and ease of use) for general fluid, solid and fluid-solid interaction problems. It is available under the GNU GPL from its project page on launchpad.net.