Cancer is a collective term for a class of diseases that are a leading cause of death worldwide. The World Health Organization reports that in 2008 alone, 7.6 million deaths (about 13% of all deaths worldwide) were the result of various kinds of cancerous tumours. The development of a tumour is a complex phenomenon whose immediate cause is that some specific cell type has managed to overcome the usual regulatory signals of the cell cycle to grow, proliferate and live beyond its normal, programmed range. These rapidly proliferating, diseased cells proceed to invade surrounding tissue and later spread to other organs in a process called metastasis, which is often fatal.

The processes that drive the growth and development of tumours are numerous and intricately coupled, but the fact that they can be posed in physical and mathematical terms allows them to be carefully studied through computer simulation. This research considers the tumour scale in the interest of eventually developing a system-level understanding of the progression of cancer. Starting with our broad continuum physical model for studying the growth and remodelling of biological tissue, we have developed an initial model tuned to the bio-chemo-mechanics of tumour growth.

The asymmetric growth of a constrained solid tumour.

Cancer cells, like all other cells, store chemical free energy as ATP, which they synthesize by consuming glucose in the presence of oxygen. The cells use this chemical free energy for proliferation, migration and intercellular or cell-ECM (extra-cellular matrix) mechanical interactions. Both glucose and oxygen must be transported over the length scale of the tumor. Motivated by this, our model incorporates (a) cell proliferation, (b) cell motility, (c) metabolism by which the cells consume glucose and oxygen and create by-products, (d) mechanical interactions between cancer cells, the ECM and surrounding tissues and (e) mass transport of chemical species to and through the tumor. 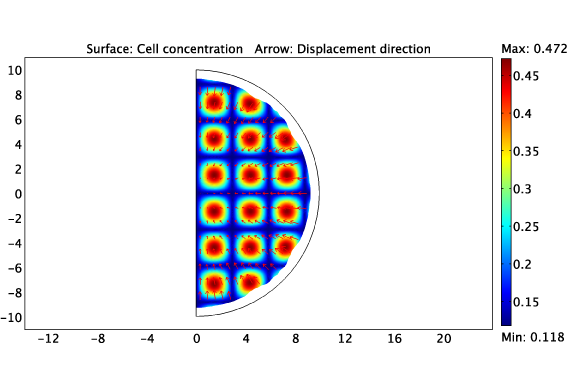 Heterogeneous cell-ECM traction due to a non-uniform distribution of cancer cells.

Free energy, the energy available to do useful work, is consumed or created in each of these processes and thus provides a universal measure for comparison between them, and of their variation with time and physical state of the tumour. We have used our model to compute an initial estimate of the free energy rates associated with all the above bio-chemo-mechanical processes that influence the tumour’s progression. Knowing these free energy rates will give cancer biologists a quantitative measure to compare (a) the influences of bio-chemo and mechanical processes regulating tumour growth, and (b) the phenotypic differences e.g., the proliferation rates versus migration rates of comparable cancer cell types or cell lines. New therapies may emerge by drugs targeting weaknesses so revealed.